Our time on the Rio Grande is winding down, as is my energy, so we decided our last outing would be a mini-bus tour originating at Laguna Atascosa Wildlife Refuge touring the Bahia Grande unit.

We had visited Atascosa the week before, but it was too cold, and my legs were not strong enough to attempt the trails.  We were impressed by what saw though, especially the fact that after not being able to photo the elusive Green Jay anywhere else, here they had feeders and a blind to offer plenty of photo ops.  I caught this beauty on film that day.

The price for a bus tour is $4 for adults, $3 for seniors.  The guides are volunteers – a husband and wife – knowledgeable about the birds and wildlife of the area.  We had heard that there was a confirmed sighting of a Ocelet two days earlier, so we were hopeful.

A Northern Harrier greeted us as we began our ride, and in no time we saw four White-Tailed Deer, a Nilgai Antelope bull, more Harriers and a flock of Sandhill Cranes flying over.  As we were in an enclosed vehicle, we favoured our binoculars over the cameras , so I didn’t get any pictures, but the Green Jays were happy for more exposure.

The day was chilly by Texas standards, and despite the bright blue sky, a strong breeze affected the number of birds we encountered.  A watering hole, normally replete with water fowl, offered only a few specimens:  a Snowy, Reddish, and Tri-colored Egret; a few gulls and terns, a couple of Horned Larks and a Curlew.  We were able to get out to take pictures but the birds were too far for effective photos.

Further along, we came to an area they call “Pelican Bay”.  The White Pelicans chose to gather in a more protected area that day, probably over a hundred of them.   Sadly, the area is under drought and the water levels were very low.  We did manage to see a few Caracaras, more Harriers, and quite a few Kestrels.

The highlight of our trip was our last sighting – a sole raptor, perched on a low, dead tree.   Usually seen in pairs, this was the Aplomado Falcon, a bird currently endangered in the area.  We looked around for the mate in vain.  One of the passengers had a scope, so we all got a good, close-up view and I did manage to capture the bird’s image, although it doesn’t really do it any justice.

“Have you seen the Pauraque?”  our guide asked at the end of the tour. 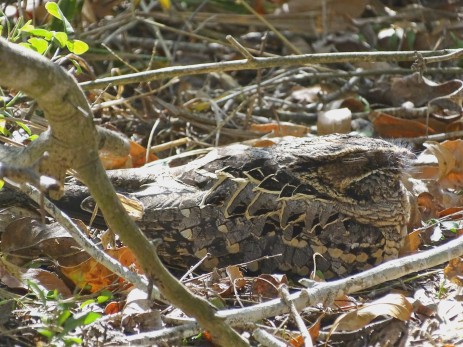 The Common Pauraque, of the Nightjars family, is a master of camouflage.  As much as we’d searched the ground everywhere we’d been, we had not spotted this bird.  Even when pointed out, four of us struggled to see it.  I tried to alter the photo to highlight the bird in this photo, but it’s easy to appreciate how well it blends in.

Spurred on by the thrill of finally seeing this bird, I went hunting for more.  On another trail, I spotted a brown and beige pattern under a bush.  Zooming in with my lens, I looked for the beak to verify my finding, except this creature did not have a beak; it was a snake.  I backed out quickly, heart racing.  Rattlesnakes are a denizen of the area, as all the guide books warn.

The Green Jays turned out to be the star performers of the day.  Apparently unfazed by the weather, these clown birds kept popping up, and I, obligingly, kept taking pictures.  Who could resist?

Permission to write, paint, and imagine are the gifts I gave myself when chronic illness hit - a fair exchange: being for doing. Relevance is an attitude. Humour essential. View all posts by V.J. Knutson

Inessential am I ghost of a woman burden avoidance Imperfect am I each flaw a step towards deepening blue And yet,  I exist purpose unknown shadow dancing. (Image: Self-portrait)

Write Me an Ending

Strains of “Desperado” float through my mind as images of the plague assault me- this new life too much, future unforeseeable caught in a dystopian novel. (Tuesdays I borrow from Twitter @Vjknutson.  Image my own.)