We are full of the excitement of making plans, and after signing more papers, decide to go out for lunch.  Both of our minds are going in different directions, so when the hostess seats us, I barely notice the couple sitting next to us, except that they are young – she a striking chestnut-haired beauty, and he a smartly dressed young man.  I nod and smile and turn my attention to the menu.

We order and pull out our phones.  Ric is looking for RV storage in the new town, and I am googling recreational programs.  The young man’s voice raises and it is hard not to be distracted by their conversation.

“Conversation” isn’t exactly the right word, as he seems to be doing all the talking – rattling off facts about Toronto and out west and something about fitness gurus and healthy lifestyles, and I wait to hear from the young woman, but all she emits is an occasional “uh huh”.  He doesn’t seem to notice her lack of engagement though, just gestures excitedly and leans forward, and I wonder if the table will cut him in half.

This must be a first date, I think to myself.  And he is blowing it.

Food comes for both tables and there is a brief pause again, and then he starts talking about work, as if they are co-workers.  Maybe it is that she is new – I hope to God, he isn’t her boss.

“Have you seen __________ ?” He asks her and she counters with a no, and he says:  “You have to add that to your list,” and I cringe, wanting to warn her to run as fast as she can from this man, who so obviously insecure about himself, already wants to control her.

And then his tone changes and he says:  “I usually go home for lunch.  I’ve just adopted two kittens and they need the extra attention.” 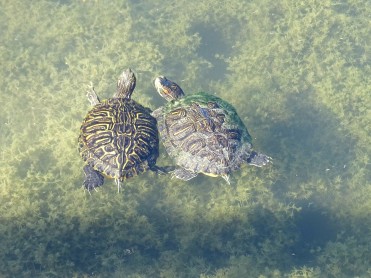 The young woman and I immediately relax our posture.  I feel her shift on the bench next to me, as she asks him about the cats, the most she has uttered all lunch hour.

She is firing questions, leading the conversation (it is a conversation now), and his voice has returned to a normal decibel, and I think:  You idiot; you should have led with the kittens if you wanted to win the girl.

I daren’t look at them for fear they’ll know I’m listening, but as we pay the bill and get up to leave, I glance their way to see that he is a tall, gangly man, whose closely shaven head only elongates his already stretched face, and she is a classic beauty, who oozes poise and politeness, and I wonder if there will be a second lunch or if I’ve read the situation completely wrong.

“So what do you think their story was?” I ask Ric when we get in the car.

“The couple next to us.”

Must be the curse of the writer that I can’t help but eavesdrop, projecting stories onto innocent diners.

Faint at the sight of needlesa squeamish gene, I’m sure Suck it up, adult self admonishesChild looks away, breath held Sixty-two years its been thustoo many pokes to count And now there is new promisea vaccine to ward off the virus Hope reduced to one tiny vialbelieve me, this sleeve’s rolling up. (Written for Reena’s […]

Concrete is cold, imposingdoes nothing for aesthetics At least we’re protected,I tell the littles, ignoring Snot dripping, slimeoozing from unsealedwindowsills, cobwebsand bits of shedding pink It’s the best I can do:four walls and a roof. Except the ceilingis bulging, mold and rotcertain to rain down on us While upstairs, the manignores the leaks, luxuriatesin his […]