“No guarantee about this RV park,” Ric said as we pulled off the highway and entered the spaghetti bowl of roadways into San Antonio.

Bit by bit we moved off the main thoroughfares onto city streets, and as we did the landscape changed drastically.  Abandoned buildings with overgrown lots popped up between commercial and industrial sites.  The closer we got to our destination, the more destitute the area appeared.

“We don’t have to stay the whole five days,” Ric said reading my thoughts.  “We can leave tomorrow.”

Traveler’s World RV Resort is situated in old San Antonio, and as we pulled into the entrance it was easy to see that the park itself is charming – in direct contrast to the surrounding area.  The decision to stay was easy.

Ric had been talking about the famous river walk before we left home.  Having been to many river walks, I thought I had a good idea of what to expect.  I was completely misguided.

Ignoring advice to hop on the bus just outside our resort, we drove into town and found a parking lot advertising wheelchair access.

“Just go that way,”  the attendant said, pointing towards what looked like a restaurant entrance.  We walked through the doorway and were instantly transported into another era.  Below where we stood was a sidewalk cafe and beside it a narrow waterway that veered in two directions.  Low bridges along the waterway connected our side of the river to the other – a trail of hotels, shops and restaurants. None of it had been visible from the road.

A waiter directed us to a ramp and soon we were on the walkway.

“Lunch, ma’am?” someone asked offering a menu, but I was too enchanted to think about it at that moment.

“Where do we catch the boat ride?”

He indicated the direction and within minutes we were onboard waiting for the tour to begin.  The boat ride, only thirty-five minutes in duration, was a perfect way to get oriented to all that the river walk has to offer, but we stuck to the nearby restaurant due to my mobility limitations.

“How far is the Alamo?”  I asked the waiter.

“Back up the ramp and across the street a little ways.”

“Let’s try it!”  I suggested to Ric.  I didn’t want to leave this magical place.

A little ways turned out to be across two streets and up a couple of blocks – further than my muscles could muster.  By the time we reached the Alamo, I just needed to find a place to sit.  Ric sat with me (I suspect his knees were screaming too).  We sat in small island across the street from the historical setting and admired the surroundings.

Rested we hobbled back, me cursing my limitations.

The next day we ventured to the Alamo Quarry Market shopping area on E Basse Road.  It’s a beautiful area that offers a lot of different shops, although I was too tired to venture in.  We did, however, manage to have a wonderful lunch in the Canyon Cafe.  Ric had one of the chef specialties of the day:  a seafood soup, and I had blackened salmon caesar salad.  Delicious.

As tired as I was, I really wanted to see the river walk one more time and possibly at night, as we’d heard the area was lit up for Christmas, so we decided to visit The Tower of the Americas for dinner. 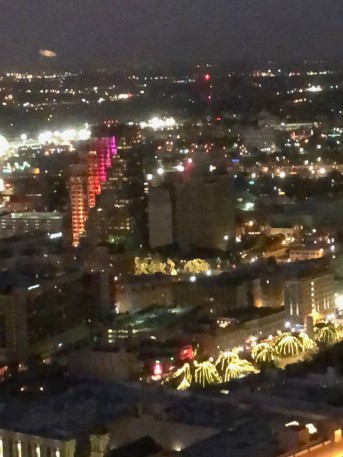 The Tower of the Americas is reminiscent of the CN tower in Toronto, with an observation deck, a dining floor, a bar floor, and even a thrill ride.  We arrived at 5:30, just as the sun was setting, which proved to be a perfect time.  The hostess seated us at a cosy corner table right next to the window.  So romantic.  We ordered mocktails to mark the occasion.

The menu is extensive and the prices match the view – sky-high.  When I explained to the waitress about my food issues (yes, I’m one of those), she brought the manager over to review the menu with me.  I was impressed and excited about the meal I was about to inhale.  As an appetizer, I chose the humus plate, which came with sliced vegetables instead of the pita chips.  My mouth watered in anticipation of the main entrée.

Imagine my disappointment when my plate arrived with a piece of plain fish and a side of asparagus, period.  The kitchen had merely eliminated rather than replaced the offending food items.  Although the sea bass was cooked to perfection, it did not warrant the $41 price tag.

We lingered anyway, enjoying the view of San Antonio lit up at night.  The river walk, by the way, was not visible from the tower, so that was a bit of a letdown, but it was something to see the roadways, like golden serpents, snaking in and out of the city, and the downtown area was aglow with Christmas splendour.

We left San Antonia the next morning with somewhat heavy hearts.  There had been more to see, and it really is a fascinating city.  I hope we pass this way again in future travels.

(Sorry about the photography; hopefully, I’ll get better as we go.)

Shore knows repetitiontides thrust, withdraw –natural rhythm Why then should I questionstrife’s return – is it not justtide returning my load? Not as stalwart as the shoremisery bleeds onto pagetainting my ocean. (Tuesdays, I borrow from Twitter @Vjknutson. This poem edited. Image my own.)

Father taught us to fetch –What else are children for? I did not like his demeaning sneernor the way he lorded control Mother learned to ask how highwhen he snapped: “Jump!” I vowed to be differentto never let him break me But his arms were strongerand my fear real, and so From my father, I’ve […]