When nineteen-year-old Faby attends the annual Vaudeville Show in her small town, she is hoping to escape to the drudgery of day-to-day life in the Gauthier household, where chores are watched over by the critical eye of Maman and Maman Aurore. The year is 1924, the setting small town Vermont, USA, and even though she’s been attending these fanfares since she was seven, Faby has no idea that this particular show is about to change her life.

“Telling Sonny” is the first published book of author Elizabeth Gauffreau. I’ve had the honour of meeting and communicating with Elizabeth through her blog, so was excited to read her work.

“Telling Sonny” reads like an historical memoir, the descriptive details effectively capture the ambiance of the era. As a reader, I felt myself swept up in the emotions of the story: fearing for Faby, wishing she’d assert more on her own behalf, frustrated by the helplessness of her situation.

Gauffreau’s gift is the ability to create an animated portrait of a bygone era and pair it with a timeless issue, culminating in a suspenseful and satisfying read.

In 1958, Cuba is experiencing political unrest.  The Perez sisters, sheltered from the uprising by their social standing, look for opportunities to sneak out of the house.  During one of these outings, nineteen-year-old Elisa meets a man who steals her heart.  He is a revolutionary.  Their forbidden romance heats up as the plots against the government force the current leader to flee.  For their own safety, the Perez family must also escape, leaving their possessions, and secrets behind.

Fast forward to 2017, Miami.  Elisa’s granddaughter is planning a trip to Cuba, under the guise of a travel writer.  She is actually planning to carry out her grandmother’s dying wishes: to leave her ashes in Cuba.  Marisol hopes to learn more about the country of her heritage, encouraged by the romantic stories of her grandmother and great aunts.  Marisol encounters more than she anticipated.

Next Year In Havana, by Chanel Cleeton, is both historical fiction and modern day romance.  It examines the human aspects of political oppression, and offers a glimpse of Cuban life beyond the all-inclusive resorts.

As a reader, I found myself immersed in the descriptions of Cuba, interested in the questions raised by Cleeton’s characters:  Is revolution ever effective?  How does change happen?  What hope do people have in the face of corrupt government?

Next Year In Havana is recommended to lovers of historical fiction, romance, or human interest stories.  It would be a suitable study for book clubs.  The audio version, available through audible.ca is narrated by Kyla Garcia, and Frankie Maria Corzo.

The atrocities of Auschwitz are no secret, and yet, every surviving story reveals another angle, not only of suffering and inhumanity, but also of the incredible endurance of the human spirit and kindness in the darkest of moments.

The Tattooist of Auschwitz is about a young man, Jewish, who volunteers for work duty and finds himself in an unimaginable situation.  He makes a pact with himself to survive at all costs, and it is this determination, and his ability to speak many languages that lands him the horrific role of tattooist – marking numbers on the throngs of arrivals.

Saving himself is not Lale’s only ambition.  Although his position sets him apart from the other prisoners, he is not without compassion, and offers help when possible.  He also falls in love.

Heather Morris was introduced to Lale Sokolov in 2003 as someone who might have an interesting story to tell.  All I can say is thank goodness for that introduction.

The Tattooist of Auschwitz is written in short, to the point, vignettes, making it a quick and easy read.  Once I started, I could not stop.  I had to know what happened to Lale and the love of his life, Gita.  By the end of the book, I was sobbing.

I would recommend this book for book clubs, or even as an alternate text in high schools.

The letter that arrives decades after it is post-marked is the first indication that Edie’s mother has been keeping secrets.  Although her mother is not sharing any information, Edie is intrigued enough to investigate on her own.  She finds herself visiting a decaying castle, where she encounters the Blythe sisters, and the mystery deepens.

Fluctuating between current and war times, The Distant Hours is richly descriptive, and offers an intriguing storyline as well as quirky, but loveable characters.  The castle, itself, with its draughty corridors and shadowy corners is the perfect setting to spark the imagination.

Kate Morton is fast becoming one of my favourite authors.  Opening her novels is like settling in with a comfortable old friend, knowing that the conversation will be lively and satisfying.

Other books that I have read and reviewed by this author include:  The Forgotten Garden, The Secret Keeper, and The Lake House.

Some books hook you right from the beginning and won’t let you go until you’ve drained every last word out of them.  A Land More Kind Than Home is such a novel.

Told through the perspective of three narrators, Wiley Cash’s tale of fanaticism in the south is a coming of age story, a murder mystery, and a study of human character.

Addie Lyle is an old woman with brass roots sensibility.  She hasn’t stepped foot in the church since the first incident, and she has made it her business that the children of Marshall don’t need to see what goes on either.

Jess Hall is at that inquisitive age, and together with his older brother, Stump, and a neighbour boy, they do what boys do – explore outside the permitted boundaries.

The third narrator is the old sheriff, Clem, who understands too well the heartbreak and senselessness of loss.

Fire and brimstone is being taught at the local church, and there are way too many snakes involved.

I listened to the audio version of this book, read by Nick Sullivan, Lorna Raver, and Mark Bramhall.

A Land More Kind Than Home contains scenarios that are frightening, including death scenes.  Sex is referenced, but not explicit.  This would make a good book club selection.

Subtitled My Secret Life with Anaïs Nin, Apprenticed to Venus is the part memoir, part novel of Tristine Rainier, who mentored under the famous diarist.

Although  I have been inspired by Nin’s words, I have known very little about her, so I was eager to read this book.  Rainier, on an errand from her artist aunt, encounters Anaïs at her home in New York, and from there becomes part of the bizarre and tantalizing underworld of Nin’s complicated life.

The story begins with a very naive and impressionable Tristine, who is anxious to stay in her idol’s good books.  In modern day terms, Nin is a classic narcissist, who uses others for her own gain, and even though Tristine experiences the warmth and distancing characteristic of such a personality, she remains loyal to Anaïs, questioning her own motivations right to the end, and defending the lessons that Nin’s influence has taught her.

Rainier’s commitment to Nin is contagious, and I found myself also drawn in by the eccentric’s charm, wanting to know more.

Interspersed with Nin’s story is Rainier’s own story, from shy teenager to accomplished literary figure in her own right.

Apprenticed to Venus is primarily the story of two women and the bonds that define their relationship.  It is also about celebrity, and love, and the search for women’s equality.  There is nothing conventional about Anaïs Nin, as witnessed by Rainier’s account, and I think that is perhaps why I shall continue to be inspired by her. 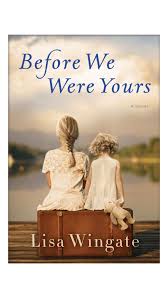 Before We Were Yours, by Lisa Wingate introduces the shameful story of the Tennessee Children’s Home Society, an organization run by Georgia Tann, a woman who made money by abducting poor children from their homes and selling them into adoption.

Wingate’s novel imagines what life would be like for siblings taken from their homes and forced into Tann’s human trafficking scheme.  It asks the question: should the past stay in the past, or is there value in revealing truths?

The story unfolds through the perspective of two women:  one an up and coming lawyer and politician, and the other an elderly woman in a nursing home.  The women’s chance meeting, provokes the younger, Avery, to investigate the connection between May and Avery’s grandmother.

Wingate weaves an intriguing tale, and the audio version is equally entertaining.

While the historical context is fascinating, and tragic, I struggled with the characters, who seem too good to be real, however; this is fiction, and when the story unwinds to the benefit of all, I guess this is what readers suspect.

That said, I am glad I listened to this book, as I now have awareness of a topic that I feel deserves further attention.  Disregard for human life continues to be a problem.  Here is literature highlighting the atrocity.

Pity is a feathered thing, perches high above my bed, feeds off flakes of moulting skin, devouring the essence of me, till bone rattling with distraught, I scare it off. (Poem from Twitter @Vjknutson.  Image from personal collection.)

I paint smiles to mask the stench Greed’s perfume triggering an avalanche shame cannot hide the fear, trembles threatening to divulge weakness. (Image by yours truly.)