Growing with gratitude for life's challenges

A single onion, its papery crisp coating still intact, sits on a small cutting board, signalling intent.  Beside it, a sharp-edged knife, and an unopened can of salmon.

It is the salmon can that has turned this scenario from an action shot to a still-life.

I had planned to have it for dinner last night – a plan that started early in the day, when energy and clarity of thought of was still available.  I even thawed a gluten-free English muffin with the intention of spreading the salmon salad on the freshly toasted halves.  It felt like such a simple, yet healthy, option.

But then I went to the hospital, visited my now-on-the-mend husband, had my driver stop for a Starbuck’s on the way home, and ended up curled in a fetal position on the bed, feeling like I’d been thrust into a sudden-onset flu.

They must have put milk in my tea, was the only explanation I could come up with.  A couple of hours of close contact with the toilet, and I faced the ever-present dilemma of what to eat.  Could my stomach still handle the salmon?  I set it on the countertop while contemplating, selecting a small-sized onion and, well you know the rest of this picture. I considered the salmon over the next couple of hours, even picking the can up in my hands and trying desperately to will myself to continue.

In the end, I boiled an egg and ate that with muffin.

I’ll have it for lunch instead, I decided this morning, realizing that dinnertime is too late in the day for such momentous adventures. 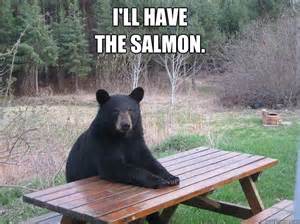 At 11:30 am, feeling somewhat energized (always a relative term with ME/CFS), I look at the onion, and the can, think about the effort it will take to open the can and then sort through the bones and skin – which I detest – and decide to rest instead.

12:12 am.  It’s not going to make itself, I realize, and I do need to eat, so I add a small glass bowl and the can opener to the setup, but still cannot see my way through to completing the action.  I lie down again. I could just nuke a cup of chicken broth.

1:38 pm.  This is ridiculous! The salmon is not going to make itself!  By now I can taste the salty fishiness of the desired repast, know it will be a gift of nutrients to my body, have convinced myself of the need.  I start with the onion, cut through the outer shell, discarding the unusable bits and finely chop half, placing it in the bowl.  That’s enough, screams my body, but I push on, opening the salmon, draining the water, and with a fork, begin to pick through the contents.  I just need to get enough meat to make this meal, I tell myself, discarding probably more than I should have.  Mashing the salmon and onion together, I add a dash of salt and pepper and a squeeze of mayonnaise (something I know I will regret later).  Done!

I sit to eat this masterpiece, afraid that I will not be able to manage it in bed, where I usually dine.

I spread the salad on thin rice cakes, savour the deliciousness with each bite, can no longer determine how hungry I am, or if I’ve eaten enough, settle on saving half of the mixture for tomorrow, and return to bed.

“What did you eat today?”  a well-meaning friend asks later.

“That sounds good – an easy meal.”

“Yes,” I respond, stifling my impulse to laugh at the irony of it all.

Who would believe that just contemplating a can of salmon could be such a battle?

One thought on “Salmon Intentions or Battle of the Can”

If we could see the soulcomprehend the constructoutline each contoursip the sacredness –Would there then be peace? (Tuesdays, I borrow from Twitter @Vjknutson. Image my own)

There is light in unknowns –at least I project it there –caught between the currentashen landscape and the achingsof a solitary childhood… I like to think faith guides mebut she is muted like the gardensof my dreams, more etherealthan palpable and I need concretehave waited too long for that train of certainty to carry me […]